Greetings to ya all!

Then #Weatherstock is over for this year and we in ‘The Chosen Few’ had a splendid time as I am sure everyone else had too! A big ‘Thank You’ goes out to the LMB and the rest of the crew over at #Landroval. Excellent done!

So, what happens next?
We have started the work on getting everything ready for this years ‘Archet Aid Fayre’ over here on #laurelin. It is the third yearly event we have made, and this year we have put together an ‘Archet Aid Commitee’ to further develop the event in the right direction.
We have also put up a website and a forum for the event, where we invite ya all to join to help us with ideas/comments and to share your (hopefully fond) memories of the last two ‘Archet Aid’s with us all.

Do you want to contribute?
We are also…

They stole our audience!

So, The Andune Ensemble were at a loose end yesterday. Not much happening it seemed so we decided to kick out the jams a little. Now, where could we go where we would be undisturbed and we could get some quality jammin’ in peace? Ah, top of Amon Sul, of course.

So, off we went and found the place deserted save the usual crebans. We quickly set up and were soon playing our socks off. Think those crebans liked us; I swear I heard one of them singing

“The night is for dancing but so is the day, The Andune Ensemble are playing today”

Well, you know, those birds must have carried that message way down to The Forsaken Inn where, no doubt, travellers heard and spread the word. Because, suddenly, folk started arriving to watch us play.

And more came, and more, and more….there were hundreds of them!

Man, we were smokin’, I swear my theorbo caught light. Quickly we performed Lark on the Strand, Noontide, Nights in White Satin and El Cumbanchero. The audience went wild.

Then, would you believe it, other bands insisted on playing and rudely shoved us off the stage. The gall! I mean, some of them were OK, I suppose, but they weren’t Andune. But I can hold a grudge and have entered names into my little black book. There will be consequences.

First up will be The Songburrow Strollers – they were the first to jump up and take over. Yeah, I got your names alright, I know where you live. And one dark night in The Shire, I will come and STEAL YOUR BISCUITS!

Come to Weatherstock with your graphics turned to low before you reach the summit. You will be surprised what 500 characters in all their armor can do to even the mightiest of systems. Some hints:

If your computer is dying:

When all else fails you can always watch a live stream! See below for details:

Weatherstock is a concert of epic proportions, so we ask that you observe the following courtesies:

Remember, use only approved LMB vendors for your hope tokens, pipeweed, food and ale. Take brown lembas at your own risk! It will be a long, hot day so keep hydrated – water and tea are good. Too much ale will put you to sleep and you will miss a chunk of the show and somebody may take advantage and paint your outfit pink while you slumber!

Please remove all litter when you leave.

Another guide that’s worth checking out at http://lostmathom.org/threads/weatherstock-5-saturday-20-july.1590/

To list your user channels type /listchannels; to join a channel (will be assigned next empty slot) type /joinchannel channelname and to leave a channel type /leavechannel channel name.

The RP (roleplay) channel is not displayed in your chat box by default – right click on the tab name and select filters – then you can tick RP. 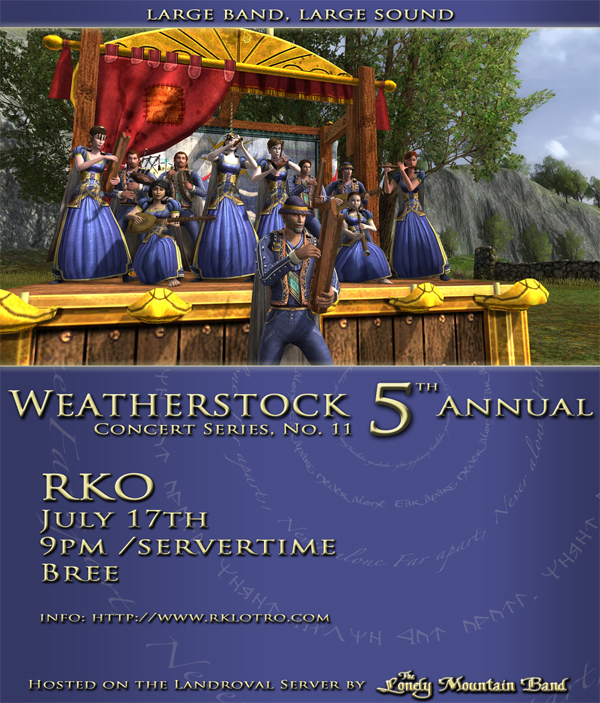 And so we come to the last of the Weatherstock Concert Series – it’s been fabulous.

Last, but by no means least are The Runic Knights Orchestra (RKO). Here’s what they have to say about themselves:

The Runic Knights Orchestra plays at kinship events, festivals and stages the occasional random concert on the Brandywine server. Over the past couple years, we have also maintained a presence on the Landroval server and members will occasionally stop by to play a random concert or visit at Ales & Tales.

The vast majority of songs in our extensive library (over 800 songs as of this post) were transcribed by RKO members, including Pinoh, Thjalfi, Rathinosk and Khaladreth.

The library covers a wide variety of music ranging from Medieval/Celtic and Classical music to Jazz, Big Band and Modern Rock, Dance and Pop music. We love music, all music.

Members that you may see at Weatherstock include:

Look, there is no point in me telling you anything about the fabulous Songburrow Strollers. They’re Weatherstock winners, they’re hobbits, they have great tunes and lyrics, they love biscuits, they bounce.

Seriously, just watch and listen, you won’t regret it. And for some tasters go visit Lina’s Biscuity Burrow